As I write this in April 2020 (to be posted in May 2020), the Coronavirus pandemic is still ongoing and only seems to be getting worse (at least here in the United States). More and more people are getting sick, partially due to the fact Americans and our federal government are still not taking COVID-19 seriously. Unfortunately, the situation of the world at large is applicable to today’s chapters of The Rule of Saint Benedict. Chapter Thirty-Six is titled “Of the Sick Brethren” (pg. 52) and Chapter Thirty-Seven is “Of Old Men and Children” (pg. 53). Here, Saint Benedict lays out the rules for how a monk is supposed to take care of the vulnerable in the monastery’s population. 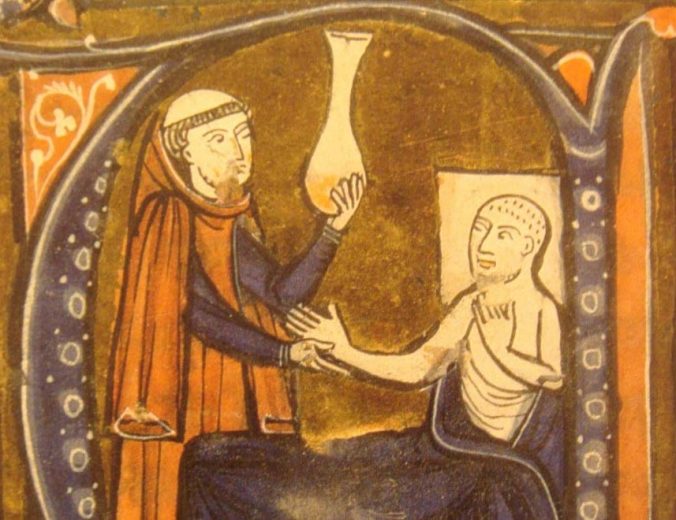 Chapter Thirty-Six starts off with the line “Before all things and above all things care is to be had of the sick” (pg. 52). The text then quotes the bible, reminding the reader that Christ was documented as saying ‘”I was sick, and ye visited Me”‘ as well as ‘”What ye have done unto one of these little ones, ye have done unto Me”‘ (pg. 52). By quoting Christ, Saint Benedict is both reminding his monkish readers of their (literal) God-given duty and denying them the ability to complain or argue against taking care of the ill. After all, a monk can’t try to worm his way out of this task without suggesting Christ was wrong, thus committing blasphemy.

Saint Benedict is aware that some sick monks might take advantage of their illness and ask for things they don’t really need. They are to “remember that they are served for the honor of God” (pg. 52). By doing so, they will avoid pestering their caretakers with “unnecessary demands” (pg. 52). However, the sick “must…be patiently borne with” (pg. 52) by the monks helping them. What a caretaker monk might think is unnecessary might not be. (For example, if someone with a headache asks for a bucket, you may think they don’t actually need it, but it’s still a good idea to get that bucket in case they throw up. It’s less hassle to dump out a bucket than clean the floor/clothes/whatever else gets messy.) And if a caretaker is still grumpy about the demands, Saint Benedict gently reminds him “from such…is gained a more abundant reward” (pg. 52).

After these instructions, Saint Benedict gives a few more basic guidelines. He reminds abbots to take “greatest care that they [the sick] suffer no neglect,” that there is a place specifically for the sick to rest in, and someone whose job is to take care of them (pg. 52). Interestingly, the text does not specify whether or not this person has to be a monk. (This is the case for my own translation and the ones I’ve linked in my sources.)

Near the end of the chapter, Saint Benedict lists how exactly one should take care of the sick. This includes some exceptions to The Rule. For example, “baths [were to] be allowed to the sick as often as may be expedient” (pg. 52) while children and monks in good health bathed less. Sick monks and the “very weakly” were also allowed to eat “flesh meat…for their recovery” (pg. 52). This means that instead of their usual vegetarian (or close to a vegetarian diet) they got to eat meat. (I should note that in Chapter Thirty-Nine Saint Benedict specifies that he’s talking about meat from “the flesh of four-footed animals” (pg. 55), so eating chicken and such was okay.) Once a monk was well he had to go back to “abstain[ing] from meat” (pg. 52).

If I had to guess, I would say that monks may have had a tendency to fake illnesses just so they could relax in the infirmary for a few days!

The chapter ends with another instruction for the abbots. He reiterates that they must make sure the sick are “not neglected” (pg. 52). And they are especially not to be ignored “by the Cellarer or servers” (pg. 52). Finally, Saint Benedict reminds his abbots once again that “whatever is done amiss by his disciples is laid to his charge” (pg. 52). Abbots forgetting that they were in charge of their monks’ souls must have been a problem, or at least was something Saint Benedict was concerned about because this is not the first time it has come up.

Chapter Thirty-Seven is only two sentences. The sentences are long, but it’s still a relatively short chapter. It starts off by saying that “although human nature is…drawn to feel pity” for the elderly and children, Saint Benedict still wants to discuss how to “provide for them” (pg. 53). Providing for them means that “their weakness [should] be always taken into account” (pg. 53). Or to be a bit more specific, he wants to be sure that children and the elderly get enough food to eat. Thus “the strictness of the Rule” should be lessened and “a kind consideration be shown for them” so they may “eat before the regular hours” (pg. 53).

It wise of Saint Benedict to write this particular rule. Sometimes people only think of themselves and as a result, they are not sympathetic towards the world’s most vulnerable populations. It’s one of those things that must be put on paper due to the powerful’s tendency to be selfish.

(I bought my copy of The Rule of Saint Benedict on Amazon. You can purchase my edition of it here.)

Wikipedia’s overview of The Rule of Saint Benedict to double-check my interpretations of the text. Link to that article here.

Solesme Abbey’s translation of The Rule of Saint Benedict can be found here as a PDF. I used this to cross-check my translation.

Christian Classics Ethereal Library’s translation of The Rule of Saint Benedict can be found here as a PDF. I used this to cross-check my translation. (You have to scroll down to see the text.)

Follow The Mediaeval Monk on WordPress.com
Join 106 other subscribers