This is something I wrote while studying abroad at Oxford. It’s an older essay, written in May 2018.

Studying medieval crime allows us to see into the world of the average person living during this time period. It also allows us to study people who otherwise would have been lost to history if it had not been for the records detailing the wrongs people had either done or had done to them. These records give us a deeper insight into the gendered world of the Middle Ages. Because exactly like in modern times, crime in the Middle Ages was gendered. Certain crimes were more likely to be committed by men than women and vise versa. The gender of the person committing the crime could affect the punishment the criminal would receive. Reactions to crimes, including slander, were gendered as well. 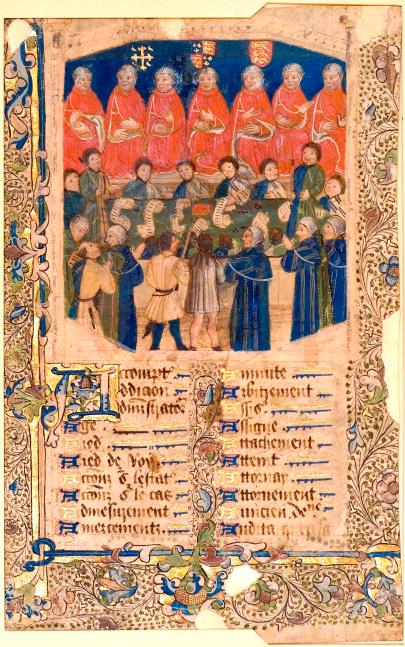 An illuminated manuscript of the Court of Common Pleas in session | Source: Wikipedia Commons

Defamation lawsuits were common occurrences in the Middle Ages. While “men and women tended to take different slanders to court” (Neal 186), these types of lawsuits were socially acceptable and legal ways for people to react against insults that might have had or did have an effect on the person’s everyday life. Now, while the majority of men’s lawsuits regarded “accusations or insinuations of dishonesty, especially of theft” (Neal 186), a defamation lawsuit was also an excellent way to react to an insult concerning a man’s masculinity without punching someone or resorting to other acts of physical violence. Another advantage of the defamation lawsuit was if the man won, not only did he have a court legally prove the insult was wrong and the insulter was lying, he would also get monetary compensation. However, not all of these lawsuits were brought forth by men. Some men were sued by the woman they sexually slandered and her witnesses included men the defendant had also slandered.

One such lawsuit took place in Sturrey in 1415. A woman named Alice Yarewell sued a man named John Maldon who had “declared…she was a common whore” (Neal 193) after both of her marriage prospects believed the rumor. In the process of telling men Alice Yarewell was a whore, John Maldon also claimed that another man who slept with Alice, Richard Bokeland, was not good at sex. While “John Maldon scored a few points by bragging about a sexual conquest” and “using the same story to belittle Richard Bokeland, he scored a few more” (Neal 193), things ended up backfiring for John when Alice sued him with Richard testifying as her witness.

This entire court case is extremely gendered. It involves a man ruining a woman’s reputation and her future solely based on her sexuality, while “at first…[there was] no shame or perceived danger…for these mature men in frankly discussing illicit sexual conduct” (Neal 194). It was only when Alice Yarewell could not get married and John Maldon spent the entire summer telling the story of his sexual conquest over and over again (Neal 194) did he face some consequences of his actions. Another aspect of the lawsuit being gendered is the fact Richard Bokeland probably did not testify to help Alice out of the goodness of his heart. The fact that we only know that Richard Bokeland exists, a man who would have otherwise been lost to history, is because he wanted to make sure his entire community knew he was not bad in bed as John Maldon claimed. This is significant because it implies that medieval men could freely talk about their sex lives without being considered less than. In contrast, women in medieval society could not testify that they were good at having sex, particularly unmarried sex, without being considered dirty and defiled.

Women who were commonly known to have what was considered deviant sex (fornication) and like it were considered whores. This was emphasized by the medieval view of prostitutes. According to Ruth Mazo Karras “in the Middle Ages…a woman was a prostitute (meretrix) because she was a lustful woman, not because of the specific behavior of accepting money for sex” (Karras 162). The fear and disgust of prostitutes, thus unmarried but sexually active women, led to laws being created to physically distinguish these women through marked items of clothing (Karras 164). However, by making prostitutes wear clothes distinguishing them as prostitutes it not only shamed them but had an unintended effect: now potential customers knew who to go to when they wanted to buy sex.

Now, female prostitutes were not the only ones who were considered deviant. Men who had sex with other men were also thought to be practicing deviant sexual behavior (Karras 161). However, unlike prostitutes, the behavior of men who had sex with other men was considered just that: behavior. The idea “that sexual acts between men were the markers of a certain type of person” (Karras 162) did not exist. Compare that concept to the idea it was a prostitute’s “sinfulness [that] made her behave badly, her behavior did not classify her as a sinner” (Karras 162). The medieval belief was that being lustful and sinful was inherently part of a woman’s nature verses for men the same lustfulness was merely behavior one could control. This certainly relates to the idea that to be masculine meant that a man had lots of “self-restraint” (Neal 198).

But not all men had the self-restraint needed to be masculine. In late medieval Bologna, theft was mostly a crime committed by men. Trevor Dean found that “in the period 1450-69, 261 named individuals were tried, and mostly convicted, of theft [and] of these, 251 were male, and 10 (4 per cent) were female” (403). This implies that thefts were an extremely masculine crime, or at the very least, male thieves in Bologna were terrible at thieving without getting caught. And contrary to popular belief, when women in Bologna stole, they did not just steal items meant for “immediate consumption” (Dean 399) such as food and other “household goods” (Dean 404). In fact, “it is the men, not the women who steal food for immediate consumption” (Dean 405). When you disregard the cases of men stealing food, both Bologna men and women stole the same sorts of items. These items include “coins, jewels, cloth and clothing” (Dean 405-406).

Medieval English women were documented to have stolen similar items as their Italian counterparts as well. Court documents from the thirteenth and fourteenth centuries show that women stole coins, cloth, and wool pelts (Goldberg 243-246). However, quite a few English women were caught stealing items meant for “immediate consumption” (Dean 399) as well as “household goods” (Dean 404). Fourteenth-century peace rolls from Lincoln recorded that a woman named Margaret de Staynrop stole a brass pot and that she will be hanged for doing so (Goldberg 243). English documents from other towns recorded women being tried for stealing malt, “18 geese,” “spoons…a platter, a pewter salt” (Goldberg 244), “a bushel of beans,” another “brass pot and a plate…a cloak,” “one blanket…and other necessaries,” chickens (Goldberg 245) and other types of livestock (Goldberg 246) as well as “a brazen pan, three pecks of wheat, and a loaf of bread” (Goldberg 246). It appears that English medieval women were more likely to steal things related to the domestic sphere than Italian women in Bologna. The implication is that these women did not have access to goods that they needed.

Physical items were not the only things that could be stolen in the Middle Ages. The gendered crime of ravishment included the theft of people. Ravishment did not just happen to wives. Heirs of both genders who were still in their minority could be ravished too. Now, the definition of ravishment in the medieval period did not mean rape, however, on occasion rape happened while a woman was being ravished (Walker 237). However, sometimes ravishment, especially in the case of women who were of age, was consensual. In fact, “women allowed themselves to be abducted in order to affirm their own choice of a husband and force their families to accept the relationship” (Walker 237). Women also “allowed themselves to be abducted in order to leave their husbands” (Walker 237-238). Due to the fact married women were considered property of their husbands, these records show that the only way for a medieval woman to chose who to marry or to leave an abusive situation was to plan and commit what society and the law considered a crime. It is interesting to note that whenever one of these “consensual abductions” (Walker 239) occurred, the woman trying to leave her husband was not forced to go back to him. Instead the woman’s husband “had to be satisfied with damages that were usually close in the amount to the value of the chattels” (Walker 246). In contrast, underage heirs who had been ravished “could be recovered as well as damages” (Walker 246).

In conclusion, crime in the Middle Ages was gendered in different ways depending on the century and the location of the crime. Who committed crimes, what kinds of crimes they committed and the punishment of such crimes depended on what the negative effect of a person’s actions was (perceived or otherwise). Defamation lawsuits were an excellent way to remind people, men in particular, that their speech had consequences, even if they did not feel those consequences themselves. Persecution of sexual deviancy kept people in check, even if sexuality was thought of as mere behavior for men or something that was part of your morality for women. Which sex committed crimes further enforced the idea of medieval masculinity and femininity, even if these ideas seemed to be reversed in certain European locations. Finally, the fact that women were considered property was further emphasized by the punishment of ravishment: paying the man the property damage of the woman you “stole”.

Follow The Mediaeval Monk on WordPress.com
Join 106 other subscribers